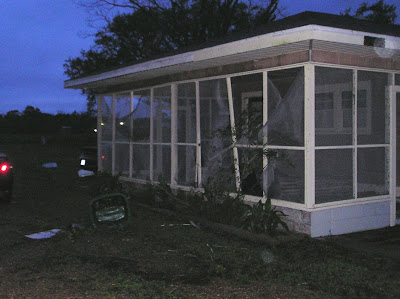 We have gotten a lot of severe weather late last week. On Thursday night, we were hit by a tornado! This is rare for South Louisiana unless it’s associated with a hurricane or severe weather. It still doesn’t happen that often with most thunderstorms. This was my first experience with a tornado and hoping my last. This was definitely one of the scariest things I’ve ever experienced. It’s even scarier since we don’t have basements or cellars, because of the sea level, and the ground is too soft to support one.

It was late Thursday night before it happened. We had a line that just passed, and I was watching the Weather Channel to get updates. I was waiting for the second line to pass, and they just dropped the warning for my area. Not even 10 minutes later, close to midnight, I got in my bed just waiting for the impending bad weather. Suddenly I could hear a whooshing sound outside the windows. It didn’t sound like a train to me, but more like a strong rush of wind. I could tell it wasn’t wind either and I had a bad feeling wash over me. I shook my husband awake frantically asking what was that noise. Of course he was trying to wake up and asking me what noise. I asked him again louder what’s that noise and it sounds like a very loud gust of wind coming. I knew it wasn’t wind in the normal sense but something else. As he listened, his eyes grew large and his face turned pale. I knew what it was when I saw his face. He commanded me to get in the hallway with our son. He was already in our room laying on a sleeping bag. I grabbed him and ran into the interior closet we have in our hallway. My husband grabbed the flashlight and braced the door from the outside. The house was shaking and you can feel the pressure being sucked out. It didn’t last long and probably passed in less than a minute, but it seemed like it took much longer. Of course we lost electricity, and it took a few hours to get it restored since it hit right before the rain and lightening passed.

We had so much adrenaline pumping through our bodies, that we couldn’t fall asleep until almost 3AM on Friday morning. We were very lucky that nothing serious happened and we are all safe. I won’t lie in saying that I was very frightened, though I was trying to put on a brave face for my son. I am glad that I had all those drills at school when I was a kid. I knew what to do when faced with one. The yard was littered with metal from roofs, awning, and buildings from neighbors. None of it was for us since we don’t have any metal structures. My porch took a beating with screens torn and some of the wooden slats were knocked down. My garage and shed also took a beating along with some shingles pulled off my roof. I didn’t lose a single one after Gustav. It did a lot of isolated damage and more than any hurricane has ever done. I’m sure this was a small one so I can’t even imagine how much damage a large one would cause. My neighbor received more damage than we did. Her neighbor lost their carport (metal) and it was thrown at her house. It mostly broke a window and pulled the window casing out, along with some roof damage, her house is intact. My house also has siding that was cracked from debris hitting the house. We also had metal hanging in our trees. My yard has large and deep gashes from debris hitting the ground. I have never seen that kind of damage done after a hurricane. I also had some damage done to our cars. I have pictures of the damage done, but again we are all safe. 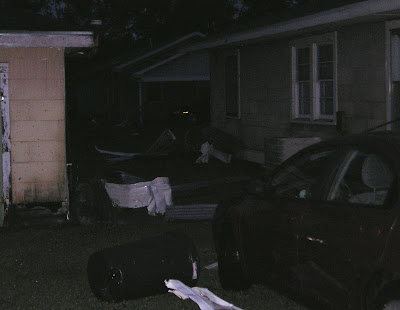 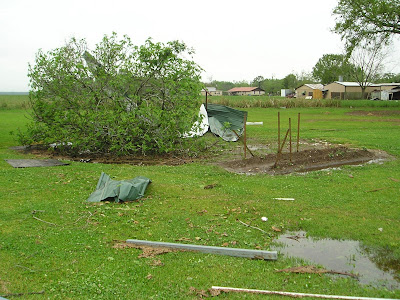 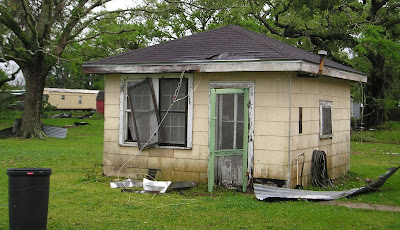 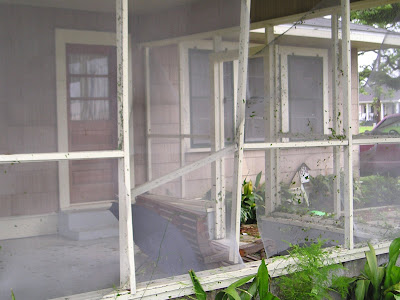 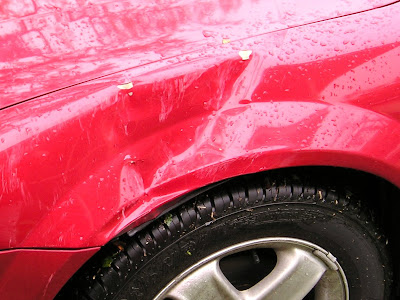